The odds of a marriage lasting twenty five or even fifteen years are decreasing.

Reporting  on recently released marriage census data, the New York Times noted that more than half the Americans who might have celebrated their twenty fifth  wedding anniversaries since 2000 were divorced, separated or widowed before reaching that milestone. 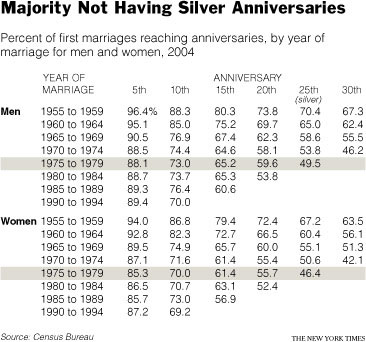 "For the first time at least since World War II, women and men who married in the late 1970s had a less than even chance of still being married 25 years later."

Of course, one of the reasons for this drop-off is that people are marrying later in life increasing the chances that a spouse will be widowed, rather than divorced before reaching their twenty fifth anniversary.

There really does seem to be a "seven-year itch."Couples who separate do so, on average, after seven years and divorce after eight.