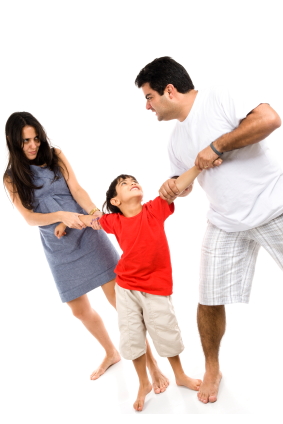 In cases where the divorcing parents are capable of co-parenting and live within geographical proximity of each other, a co-parenting custody arrangement may be in the best interests of the children.

Of late, there is a trend towards co-parenting, where the children spend equal periods of time with both of their parents.  The trick for all involved is designing a parenting plan that maximizes each parent’s time with the children, but minimizes troubling transitions, and limits the children’s time separated from the other parent.  Daily exchanges are confusing and simply involve too many transitions.   Weekly exchanges result in long periods away from the other parent.

The types of co-parenting plans run the gamut and are only limited by the parties’ willingness to be creative in designing a workable plan.  In one common arrangement, the children will be with one parent on Monday and Tuesdays and with the other parent on Wednesdays and Thursdays; the parents then alternate weekends-Friday through Sunday.   In another scenario, the time is split with one parent having the children 4 consecutive days and the other 3 consecutive days, then the time split is reversed so at the end of 14 days, each parent spends 7 days with the children.

While a 50/50 split may be desired, in some cases the children’s school schedules or the parents’ work schedules make the described time shares impractical or unmanageable.    A more traditional custodial arrangement may be desired; time imbalances could be equalized with the non custodial parent having the children during vacations, holidays and throughout the summer.

In order for a joint parenting plan to succeed, it is essential that the parents will be willing to be flexible and to put the interests of the children first.  Invariably, the children’s school or extra-curricular activities or the one of the parents’ work schedules will require that the access schedule be “adjusted.”   If the parents are inflexible or unwilling to cooperate with each other to co-parent their children, a joint custody parenting plan will simply not work.