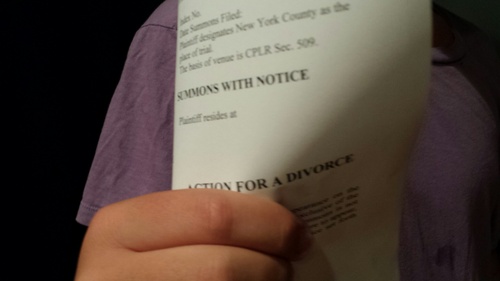 The next time you check into Facebook, you may get more than a “Like” from one of your friends, you could be served with legal papers.

Recently, a New York judge authorized service of legal papers through Facebook in a family law case. Generally, the summons must be personally served in a New York matrimonial in order to provide the party being served with actual notice of the action.

Problems arise when parties separate, move on with their lives, and then lose contact with each other. Later, when a divorce or other family law action is commenced and legal papers need be personally served, one of the parties can no longer be located.

New York courts can authorize service by an alternative method when a party demonstrates, “after diligent inquiry” that personal service cannot be made. In the past, I have been allowed to make service by publication-one of the “legal notices” commonly found in the classified section of a local newspaper that, I suspect, no one ever reads. I have also been allowed to make service by email to a party who moved overseas, communicated with me and my client via email, but refused to reveal where he was actually living.

Service by social media is a logical extension of service by email, particularly if it can be demonstrated, as was the situation in the recent New York case that the party maintains an “active social media account.”

Given that social media may be the new means of communication, it seems logical that it can be used as an avenue for making service. My concern is that by permitting service of sensitive and potentially inflammatory pleadings publicly through Facebook, Twitter and LinkedIn, service through social media could be used as a weapon to embarrass or humiliate an unsuspecting defendant.

previous
A Torn Up Pre Nup Is Still Valid
next
Dog Divorce Tug of Wars: Preventable By a Pup-Nup