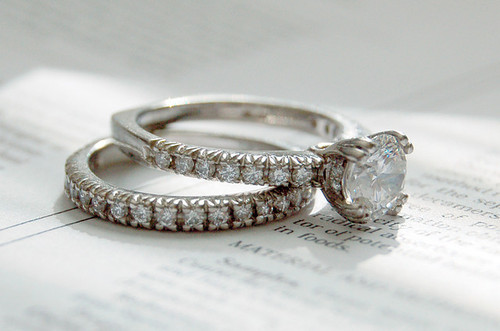 The size of your engagement ring could be a predictor of the success of your marriage.

A study conducted by two economics professors at Emory University concluded that the higher the cost of the engagement ring, the shorter the marriage. They further found that less expensive rings were often associated with longer marriages.

The wedding cost was also found to be predictive of the success of a marriage. A couple spending more than $20,000 on a wedding were over three times likely to get divorced than those who spent between $5,000 and $10,000.

Interestingly and seemingly contradictory, a well-attended wedding, followed by a honeymoon, regardless of cost was “positively associated” with marriage duration.

Of course these costs are probably not relevant to engagement rings and weddings in the New York metropolitan area where wedding expenses are through the stratosphere. Perhaps the study harkens to a different, less materialistic time when people surrounded themselves with family and not things. Or maybe it is something else entirely-maybe people who give a $1000 diamond engagement rings just can’t afford to get divorced.

previous
Alimony Reform- Are The Times A'Changing?
next
Can My Spouse Prevent Me From Getting A Divorce By Ignoring It?