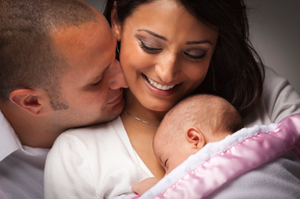 While there is a strong presumption that a child, born to a wed couple is the natural child of the couple, the presumption is rebuttable.  Apparently, the child’s racial appearance may be a factor to rebut the presumption.  In reaching its decision, the court noted that while there is ample case law for providing that “appearance” cannot be considered in determining paternity, there is no case law preventing a court from considering the child’s race.

While the white husband was identified on both children’s birth certificates as the father, the petitioner had regular visitation with the children and paid child support to the couple.  The petitioner sought to establish paternity after he realized that absent an order declaring him the children’s parent, the married couple could unilaterally cut off all access to the children.  The children apparently had a complexion noticeably darker than the couple identified as their birth parents and their sibling, who was natural child of the married parents.

In ordering the paternity test which the court noted definitively establishes paternity, the court stated:

the adults’ history of behavior all points to a likelihood that [the petitioner] is the biological father of the subject children, and the children’s behavior indicates they understand that he is their biological father to the extent children are able to do so. . . .  If [petitioner] were not in the picture, the girls would still have to recognize—at some point—that either Mr. G. or Mrs. G. is not their biological parent. The court has no magic wand to change these realities.

Given the unique set of facts where the African–American petitioner, seeking to establish paternity, had an existing relationship with the bi-racial children, had an established access schedule,  and was paying child support to the “legal” Caucasian parents, the children’s racial appearance probably was not the determinative factor in the Court’s decision.  I suspect that had the petitioner been a stranger to the children, the court would not have ordered DNA testing.   That the children racially resembled the petitioner was consistent with the parties’ conduct and merely provided another reason to conduct the paternity test

previous
How is Maintenance Calculated in New York: A Look at the Statutory Factors
next
Facts About Divorce and Marriage Revealed in Study