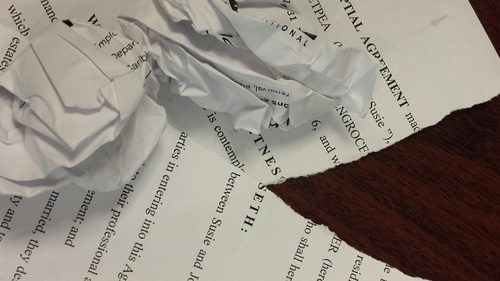 A pre-nuptial agreement torn in pieces and thrown off the honeymoon cruise ship is enforceable so ruled a Brooklyn judge.

In a rather unusual case, as detailed in the New York Post  the couple entered in a pre-nuptial agreement which limited the wife’s right to maintenance and equitable distribution of the parties’ property. The husband, the owner of strip malls and hotels, convinced his then-fiancée, to sign the pre-nup during their “whirlwind engagement of less than three weeks” by saying his father “threatened to cut him off” if he did not sign a pre-nuptial agreement. According to the wife and her then attorney, the parties never intended agreement to be enforceable and did not even attempt to negotiate it, a point now denied by the husband.

While on their honeymoon, the parties ceremoniously, ripped up their agreements and threw them in the ocean. The wife destroyed her original and the husband only a photocopy.

Twelve years and a couple of children later, when the parties divorced, the husband sought to enforce the agreement.

In rejecting the wife’s theory that parties orally agreed that they would not be bound by the agreement, the judge noted that the pre-nup contained the boilerplate provision that:

This Agreement contains the entire understanding of the parties with respect to the matters set forth herein, including, without limitation, the rights of the party with respect to the property of the other party. There are no representations, warranties, promises, covenants or understandings, oral or otherwise, other than those expressly set forth herein.

Neither this Agreement [nor] any provisions hereof, including without limitation, this article, may be altered, modified, terminated, or revoked, except by an instrument executed and acknowledged by both parties with the same formalities as this Agreement

The only way this agreement could have been revoked is in a writing, signed and acknowledged by the parties.

The lesson to be learned, When your fiancé says: “My family is forcing me to sign a pre-nup, but I will not ever look to use it against you” – You are being lied to. If you divorce, the pre-nuptial agreement will offered in court. Negotiate every term as if it means something because it does. If the agreement is to be revoked- revoke it with the requite formality.

previous
Can My Spouse Prevent Me From Getting A Divorce By Ignoring It?
next
Service by Social Networking: Can You Be Served Through Facebook?